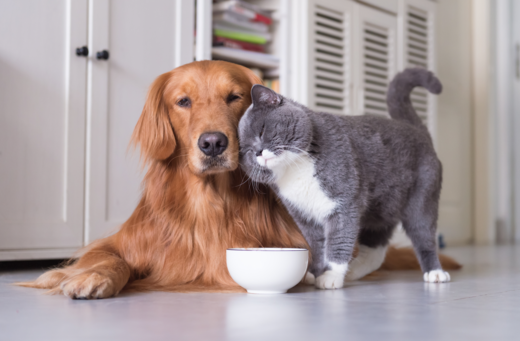 Is cat food dangerous for dogs?I just read an article online about this topic and felt the need to try to undo the information presented in the article I read. This article was on a much bigger site then ours, but I’ll give it a go none the less as it was written by a dog trainer/veterinary assistant who repeatedly cites a vet. Let me start by saying that that none of these professions (vet included) work with nutrition or are required to study nutrition in school. I will do my best to educate you on the differences so that you understand it.

What is different about cat’s needs versus a dog’s?

As many of you know cats are obligate carnivores and dogs are omnivores. You will see this used as a central argument as to why their diets are fundamentally different. It is also often used to promote the use of starches in dog food and to pretend that protein=meat in cat food. It is also important to note that AAFCO guidelines for pet foods are based on per thousand calories, not per cup, kg, etc., as well as minimums, not numbers meant for ideal health.

The fundamental differences as far as nutrients are concerned is that cats cannot turn cysteine and methionine into taurine and therefore need a direct source of it, but there are a few minimums that are significantly different as well. Here I use puppies and kittens as that they have the highest minimums:

You can see that the dog food from earlier is 5% higher in protein than this cat food even though that is one of the big differences between cats and dogs being carnivores and omnivores, respectively.

What would happen to my dog if he ate cat food?

It very much depends on the differences between your dog’s and cat’s foods. If they’re drastically different ingredients then likely the dog will react the same as if you changed to a drastically different dog food. You could likely get some diarrhea, upset stomach, etc. Over a long period of time they might get chunky if they don’t get exercise. The main thing would simply be that you’d be wasting money on nutrients the dog doesn’t need. Worst case is likely that the dog thinks it’s fun to steal cat food and engorges themself.

Conclusion
There really isn’t an issue per se with a dog eating cat food. It’s a waste of money or annoying if unintentional, but nutritionally not an issue. The same cannot be said for cats eating dog food though, because if the dog food doesn’t meet the minimums for cats then the cat can become deficient leading to health concerns. It is entirely possible (and a goal of ours) to make a food that meets the AAFCO guidelines for both dogs and cats of all ages.